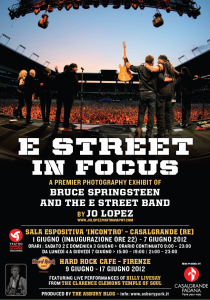 Jo Lopez gives you a “still life” glimpse into the one of the greatest live shows of all time, Bruce Springsteen & the E Street Band. With a bevy of purposefully placed cameras and access to an exclusive vantage point that has never before been granted, Joe has managed to capture the band’s energy, immediacy, and intimacy.

Jo’s unique photographic vision and style not only captures the essence of the musicians but summons viewers to “get on stage” and share the experience from Bruce and the band’s point of view. Whether depicting moments of still reflection, the long shadows of loss or a twisted blur of intense energy, each photo strains beyond its borders to tell a 40-year love story between artist and audience – and of a brotherhood that transcends the boundaries of life.

This is a must see for true Bruce fans.

Caribbean-born photographer Jo Lopez is best known for his live performance shots of Bruce Springsteen and the E Street Band. Jo’s images have been featured in many of Bruce’s recent works such as Live in Hyde Park, The Promise and the cover of Wrecking Ball. Pieces from his collection have also been in Rolling Stone Magazine and displayed at the John F. Kennedy Center for the Performing Arts in Washington, DC.